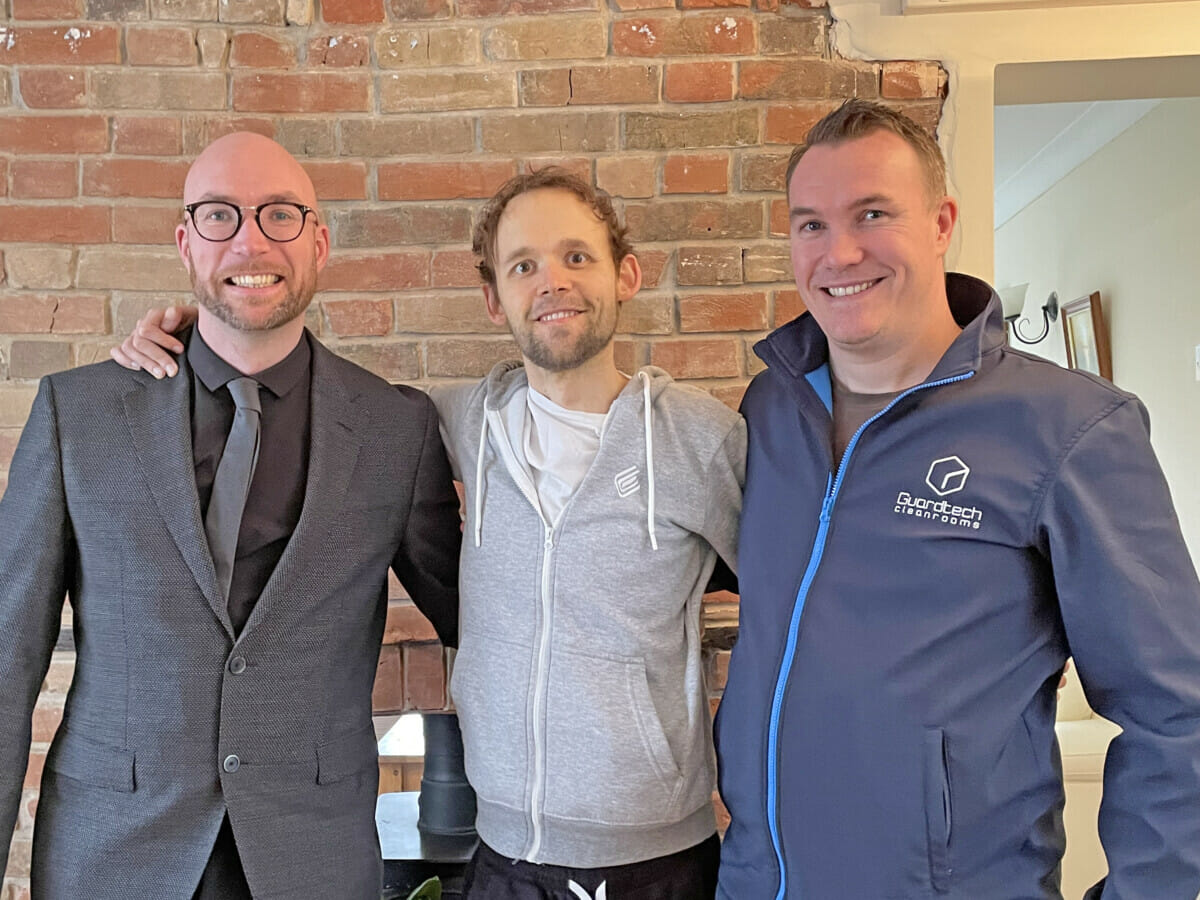 SUFFOLK-BASED cleanroom construction company the Guardtech Group have led a campaign which helped to raise £17,000 for a family friend suffering with multiple sclerosis (MS).

Guardtech Commercial Director Mark Wheeler and Marketing Manager Joe Shackley joined forces with a group of their ex-school friends to raise the money for Joe Martin, a multiple sclerosis sufferer from Woolpit, who had been struggling to eat a wide range of foods for some time.

Having already seen his quality of life deteriorate significantly due to MS, Mr Martin had dropped to just seven stone in weight by the time the group of former Thurston Community College friends decided to act.

Mr Wheeler and Mr Shackley had initially set up a GoFundMe campaign in the hope of raising some money to help fellow schoolmate Mr Martin receive medical therapy known as FMT that he couldn’t get via the NHS, with Haverhill company Guardtech pledging £4,000 towards the campaign.

“As close mates of Joe’s, we’d seen his deterioration from the start of his MS diagnosis up to the present day and we’d grown really concerned over how much weight he’d lost,” said Mr Wheeler. “So one night we decided to set up a GoFundMe page in the hope that we might be able to raise a few thousand pounds to help towards this FMT treatment he felt might help him.

“As a family business, we try to do our bit to help out as many good causes as we can and the Guardtech Directors kindly agreed to donate up to £4,000, with the hope that we’d get around the same amount in outside donations.”

But what happened next was astonishing. After sharing the GoFundMe page to their Facebook pages and beyond, friends, family and ex-colleagues of Mr Martin rallied around the cause, helping the fundraising total soar towards the £10,000 mark in just 24 hours.

Donations flooded in from as far afield as Australia, with a staggering number of ex-schoolmates of Mr Martin’s – some that he hadn’t seen for more than 20 years – chipping in to support the cause.

A motorised wheelchair was offered to the campaign, as well as support with building work for modifications to the house Mr Martin was due to move into.

The total eventually reached a whopping £13,276 (£17,276 with Guardtech’s donation) before it was finally closed officially at the start of May.

And Mr Wheeler couldn’t have been happier with the end result. “We were all blown away by everyone’s generosity,” he added. “Every single donation was amazing – and Joe was incredibly grateful for the kindness shown to him. It was a wonderful thing for him to see just how much he means to so many people and we’re really hopeful this can help him achieve a far better quality of life going forward.”

The Guardtech Group are providers of turnkey and modular cleanroom construction services, as well a wide range of controlled environment products and services.

They won two major awards this year for their CleanCube Mobile Cleanrooms, which are being used as portable labs to conduct COVID-19 PCR testing at sites across the UK.

The controlled environment innovators also recently unveiled a revolutionary new online tool which allows users to build their own bespoke cleanroom – the Isopod Configurator – which can be found on www.iso-pod.co.uk.