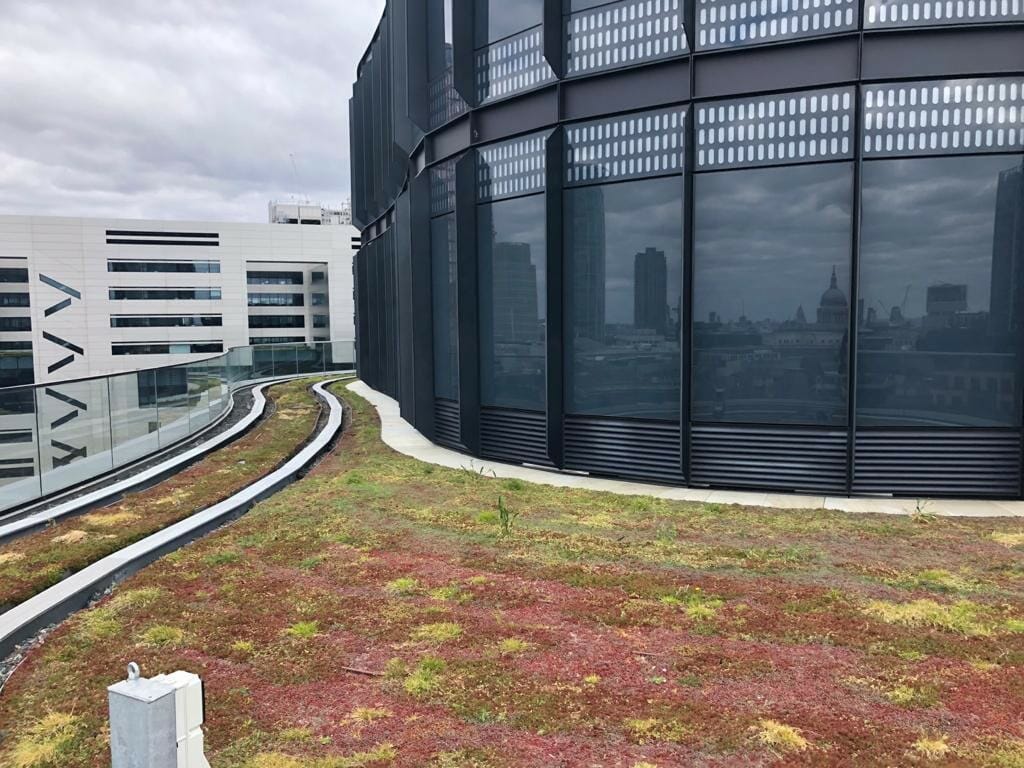 A flagship development to transform one of the capital’s busiest areas is setting new standards in productive working environments- in part helped by Eco Green Roofs Ltd (EGR).

100 Liverpool Street is the focal point of the mixed-use redevelopment of Broadgate Campus by British Land and GIC designed by Hyland Edgar Driver (HED). The project, which involved demolishing half of the original building, offers 520,000 sq ft of retail and office space over a shopping mall that remained open throughout the construction process.

Excellence in sustainability has been at the heart of the multi-storey project, which has achieved BREEAM Outstanding, received Gold WELL certification for the shell and core, is has also been net zero carbon rated. Integral to the attainment has been the biodiverse roofing and landscaping, which EGR delivered for building envelope contractor Prater Ltd on behalf of Sir Robert McAlpine.

To HED’s detailed brief, on Level 10, EGR installed sedum blanket roofs in line with GRO Code best practice. The system was designed to conceal but not obstruct nor impair the functionality of the building maintenance unit (BMU) tracks running around the perimeter. EGR’s contribution on Level 11 features a series of bespoke designed planters with specifically tailored biodiverse soils and plants to encourage variety of wildlife species. 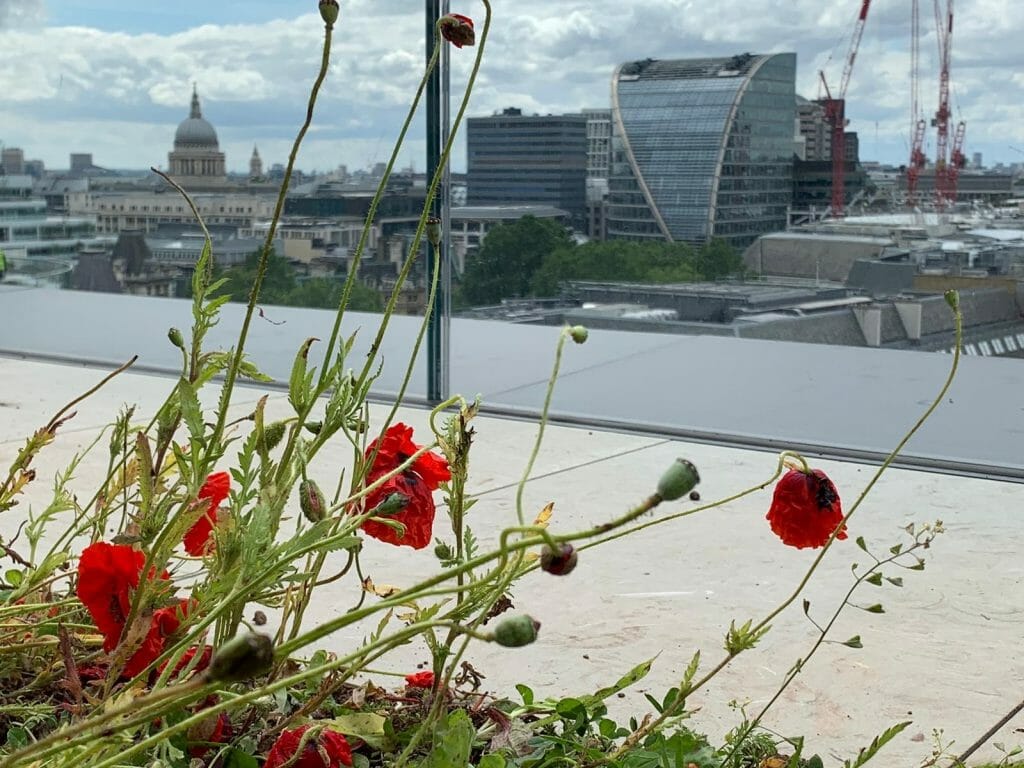 On Level 9, EGR built the green roofs up by installing  its EGR Drainage Board 20mm thick as a base followed by, EGR Extensive Substrate and EGR Sedum Blanket vegetation. A comprehensive irrigation system was incorporated to ensure the installed sedum blankets flourish all year round, specifically through the first establishment and during dry spells. To retain the green roofs and prevent any impingement of the BMU tracks, EGR edged the sedum blankets with EGR 120mm Trim.

The site crane and scaffolding had been removed at the point of the green roof installation. This lack of access, combined with the precise configuration of the BMU tracks following the contours of the building, meant EGR had to hand distribute the materials from a hoist for the sedum green roofs.

The EGR team hand-shaped the drainage board on site to fit the narrow areas between the tracks, and finely adjust the substrate build-up to ensure adequate moisture retention for the narrow strips of green roof. The trim retainers had to be fabricated to set radii, and adjustable to enable levelling to accommodate deflections created by the inverted waterproofing system.

On Level 11, EGR created a range of biodiverse areas on the terrace outside the building’s restaurant area. Wildflower plugs and a wildflower blanket were formed in bespoke 300mm steel planters complimented by log piles and limestone piles. The original brief called for 6mm thick steel; however, build constraints meant by the time  the area was constructed, all mechanical lifting had been removed from site making it physically impossible to raise such substantial components from ground to height . EGR used its technical expertise to design and fabricate a modular system that could be carried up and assembled in -situ, using 1.5mm gauge in a fin arrangement with a 6mm lip return that could slot together and  mimic the original appearance.

Observed Steve Vincent,  of EGR Major Projects,, “It is a beautifully shaped, curvaceous building, and therefore did not feature a single straight line on either the extensive green roof nor the terrace. We worked closely with Prater and the construction team to advise on the practicalities of meeting the exacting brief whilst facing a number of logistical challenges. The bespoke and challenging nature was a perfect fit for EGR.”

Commented Stuart Whiting, Prater Technical Director, “EGR excelled itself in the support given during the tender process and through to project completion. It delivered consistent quality in delivery of service on site, all at a competitive price.”

Added Matthew Webster, Head of Sustainable & Smart Buildings, at British Land, “Given that people spend 90% of their time indoors, buildings are the foundation for our physical and mental wellbeing.  Studies show that access to greenery and other natural elements boosts mental health and productivity. The built environment can, and should, be used as an instrument to improve health, happiness and productivity. British Land already achieves BREEAM Excellent on its major office schemes: 100 Liverpool Street was the exception. The project gave us a perfect opportunity to also test the WELLL Certification.  EGR was crucial in helping us achieve both goals, demonstrating a balance of ability to meet the design brief and construction practicalities to deliver  high quality, biodiverse and living roof solutions.”